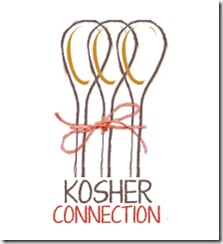 All right, so this month’s kosher connection’s theme is stuffing, and I was trying to figure out what to do with that, figuring I can’t just make stuffing, because everyone’s going to be doing that, and I have to be different. But then I thought, wait, probably everyone’s thinking that, so no one will make it. And then I thought, wait, maybe everyone’s thinking that! Ok I really didn’t take it that far, so yeah, I made actual stuffing. Stuffing, which by the way, might be the most non-photogenic food out there, is a pretty cool thing. 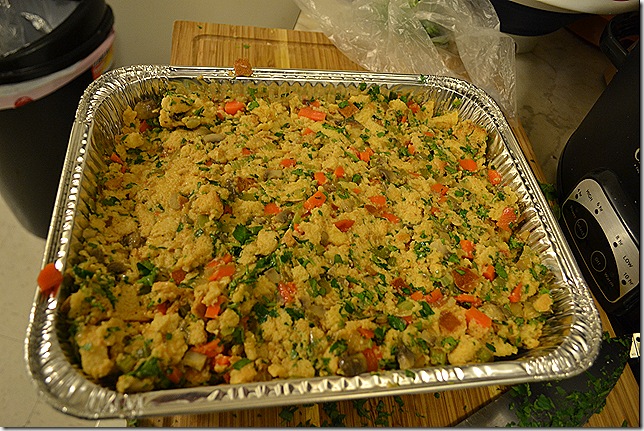 I was thinking, let me take you on a journey…in the vast expanse that is my mind, and go through how I tackle stuff I want to make in the kitchen. You’ll no doubt recall from previous posts, that I’m essentially a 2 year old, and am stubborn. I have to do things my way. Well this is my general thought process when it comes to making stuffing. Enjoy.

In my opinion, the definition of stuffing is a savory bread pudding wherein (yeah, in my mind, I say words like wherein…I’m smart like that) bread pudding = custard + liquid. Ok so first things first. The dried out bread part. The original bread matters, not only for taste, but because what’s in the bread, so you’re going to want good quality bread. To dry it, cut it into cubes, and you can leave it out on the counter, or you can dry it in a 200 degree oven, until it’s, well, dried. (If you really care, according to America’s Test Kitchen, drying in the oven is the best way to do it, because it causes evaporation of the water molecules as opposed to drying on the counter top, which because it takes longer, causes the starch and water to swell, and it’s the starch that hardens, so essentially the water is still left behind, and you want the water out of there, so the dried out bread will then soak up more liquid…) 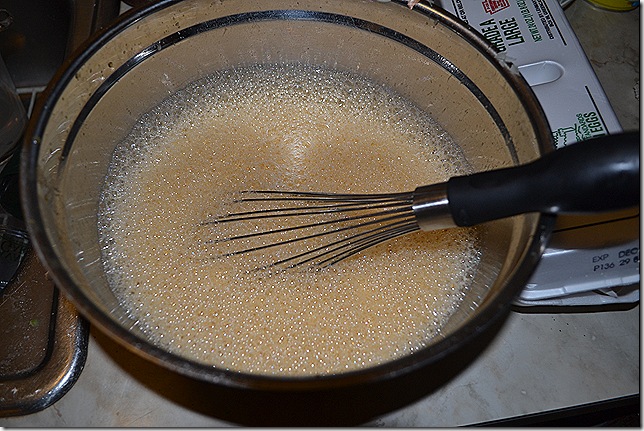 Now for the custard part. Custard is what you call something that was a liquid, and is now firmer because of eggs. So the proteins that are found in the eggs, set up into a meshwork that holds the liquid in place. Examples of custards are – creme caramels , cheesecake, quiches,. In all these cases, I usually use Ruhlman’s ratio for a free standing custard (as opposed to a non free standing custard, like creme brulee, or creme anglais, or even French style Ice cream) which is 2 parts liquid to 1 part egg. You can use any water based liquid, provided it has minerals dissolved in it (like salt water, milk, stock, etc). Basically, each individual protein is this large glob of a molecule, and it has a bunch of negative parts to it, and since they all have these negative parts, they kind of want to repel from one another, and will bind on itself, and will bind with only a few other proteins. If you add minerals, the positive parts of the mineral will occupy the negative part of the protein, and now they don’t hate each other as much, and can form a stronger bond, which is really important.

Think of how weakly bonded a scrambled egg is. it’s pretty easy to rip it apart. Now imagine this concoction, which is relying on the eggs bonding, but is heavily diluted. Which brings us to the next thing, you need to heat the custard gently to work. Reason being you don’t want to overshoot the setting temperature, because if you do, the proteins will bond to each too much, and now it’s actually squeezing the water out of it. There’s obviously more to discuss, but we’ve got stuffing to make, but one last thing. A lot of custard recipes calls for heating the liquid up, and then tempering the eggs, which can be a pain in the butt. Well truth be told, you only need to heat up the liquid, if you want to dissolve something into it (like heating up a vanilla bean in the milk, if you’re making creme caramel). However, if you’re just using the liquid straight, you don’t need to heat it up. So no need to wrap a towel around your bowl, so you can whisk with one hand, while slowly drizzling in your hot liquid with the other. For this recipe, I didn’t use the 2:1 liquid:eggs ratio, but more like 3:1 liquid:egg ratio. I used vegetable stock as the base, and it was like 900ish grams, and I used 6 eggs, which, since each egg is 50grams, comes out to about 300grams. Whisked it all together, and set it aside.

Then I sauteed onions, mushrooms, celery, and carrots, until softened, about 10 minutes. Added in minced garlic for the last 30 seconds, and then tossed it with my dried out bread. Chopped a whole lot of fresh parsley (which in my family is one of the staples of our stuffing), combined the liquid, mixed until combined, and baked in a 300 degree oven for 40 minutes.

Personally I like my stuffing, more on the fluffy than crunchy, but if you want it crunchy-er, then you can spread it more thinly on a sheet pan, or make stuffins (ie muffins + stuffing), by putting the stuffing in a muffin pan, so you’ll have more crunchy parts.

Also obviously you can stuff the stuffing into a turkey and bake away. Personally, I roast my turkey in parts so I don’t have a turkey cavity to stuff, but what I have done, is bake the stuffing with a few pieces of turkey carcass over top of it, to allow the juices to drip through.

Anyway, I hope I didn’t bore you too much.

this is enough for about 15-20 people 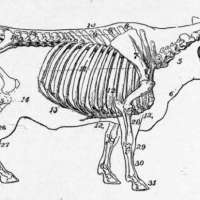