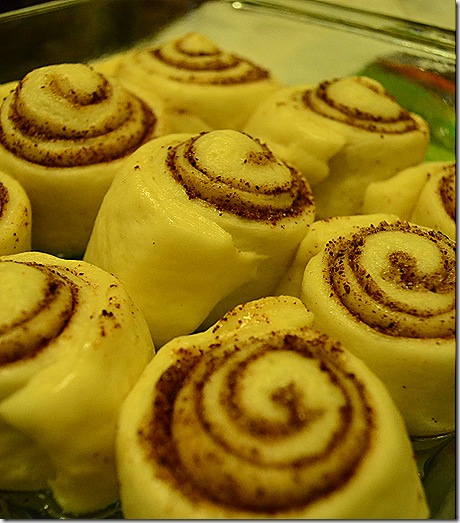 I know you like cinnamon buns, heck who doesn’t? And don’t give me that “Oh, I’m more of a candy person, than a cake person” because it’s just bogus, and you’re lying to yourself, and you have years of cake eating to catch up on, so let’s get started.

Cinnamon buns start with a yeasted dough, which falls under the category of doughs known as rich doughs. In general, there’s your regular run of the mill bread, which is some sort of variation of water, flour and yeast. Once you add fat you get into the realm of “Enriched breads.” Add even more fat, and you’ve got yourself “Rich breads” which by definition have at least 10 percent by weight (in ratio to the flour) of fat and/or sweeteners, but usually have more than that. An example of enriched breads are a whole wheat loaf with some olive oil added, or soft rolls. An example of rich breads are challah, or cinnamon buns.

When you add fat to a dough, besides adding flavor, it tenderizes it, and locks in moisture, which will soften the bread, and extend the shelf life (staling happens when water gets expelled from the starchy network, in a process known as retrogradation, and fats help hold this process off longer). Sugar (whether in liquid form or not) obviously make the dough sweet, but it also makes the dough soft, and will also help to retain moisture (sugars are “hygroscoptic” which mean they like to hold on to water). They also contribute to the color of the dough in the way of caramelization. When also adding eggs or dairy, they pretty much bring their own fats, sugars, and flavor, so to an extent they have similar properties as adding fats and sugar. One thing eggs have that makes it a kitchen powerhouse is the phospholipid called lecithin, which acts as an emulsifier (which for bread making, makes it useful when creaming butter, and will help trap air better, and make a lighter bread).

These cinnamon buns, which I got from Peter Reinhart’s book Artisan Breads Every Day, doesn’t call for eggs, but in baker’s percentages (which means the % is based on the weight of flour, and I’ll explain in a second) it calls for 14.25% fat, 61% milk, and 10.7% sugar. I feel like we’ve discussed this before, but baker’s percentage is a ratio of the ingredients in the recipe, but it uses flour as a starting point, and everything is based off of it. So let’s say for example you have 100 grams of flour, if the recipe calls for 61 grams of milk, then we say it’s 61% milk. And if the recipe tells you the baker’s percentage is 14.25% fat, that doesn’t mean 14.25% of the total recipe weight is fat, it means 14.25% of the weight of the flour, is fat. So in our example (of 100grams of flour) there will be 14.25grams of fat. Kapish?

(Just as an aside, if this isn’t good enough reason to buy a scale, I don’t know what is. Basically, all you need to know is the baker’s percentage for any particular bread you want to make, and you can scale it up or down based on how much you need. So let’s say you want to make ciabatta, which normally is a very “wet” dough, and usually is at a 70% bakers percentage [aka 70% hydrated], all you need to do is plop a big bowl on a scale, weigh out however much flour your cranium desires, and then multiply that number by .7 to figure out how much water you need, and you have your 70%.)

This dough, as Mr Reinhart calls it, is an All purpose Sweet dough. You can make cinnamon buns, sticky buns, or any type of danish. I made this dough, and had so much leftover dough, that I made his version of coffee cake with this dough (which wasn’t that great). For some reason I got it in my mind to do a reverse cinnamon bun also. Often times cinnamon buns come with a cream cheese frosting, so I decided to make a cream cheese bun with a cinnamon frosting. Sounds good right? A+ for idea, and somewhere around a D- for execution. Anyway, let’s get going.

Make the dough and roll it out to a 12×15 inch rectangle.

And spread a layer of melted butter over it

Then spread your cinnamon-sugar mixture over top. 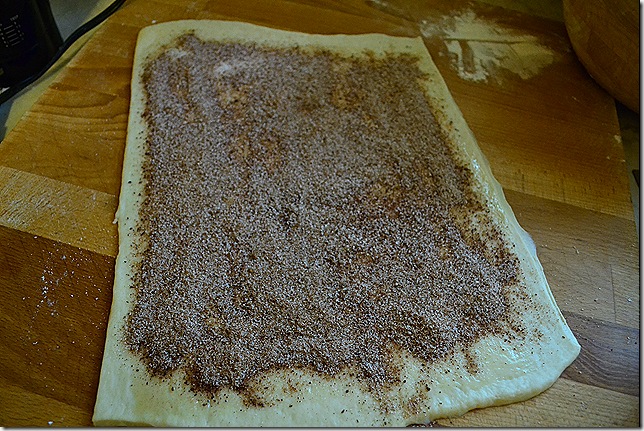 (That’s a picture of the cheese bun by the way, which we’ll get to shortly)

Then cut it up. I find it better to cut through it in a sawing motion, as opposed to a crushing motion (ie don’t use a bench scraper like I did for some of them, use a knife, and actually cut it).

Allow the dough to rise for 2 hours, and then bake in a 350 oven for 15-20 minutes rotating halfway through, until golden brown and delicious

So back to me genius idea. For the cheese buns, I just took cream cheese, and creamed it with 1/4 cup of sugar, which I then spread on the 12×15 inch rectangle of dough, then I rolled it up (as you saw earlier), and cut it up 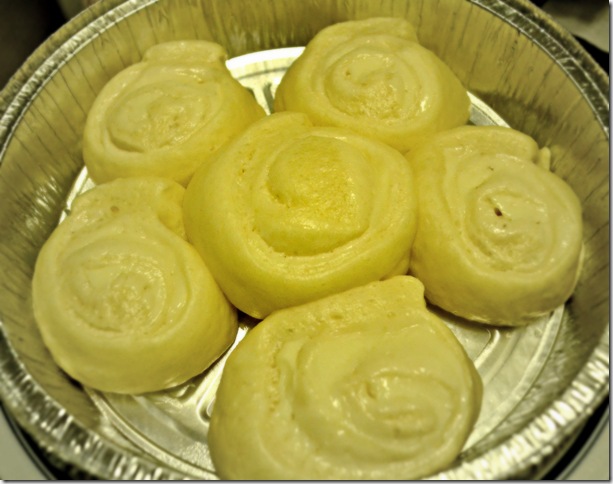 Nice right? What can go wrong right? Well here’s where things started going downhill. You see, I don’t really make frosting all too often, and in my mind, I wanted some sort of thickened cinnamon glaze; like confectionary sugar with some cinnamon and milk or what not. You know what I’m saying? Well, yeah, that didn’t work out…I ended up with this gloopy thick cinnamon soup of some kind. It tasted good, but it wasn’t really what I wanted. Oh well.

adapted from Artisan Breads Every Day