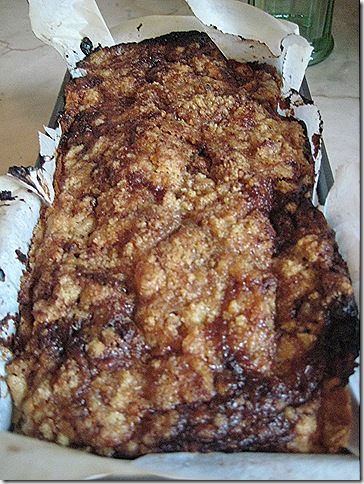 Why banana? Because I had 5 over-ripe bananas in the fridge, and needed to do something with them.

Why coffee cake? Because I love coffee and I love cake, that was a no brainer.

(Side point, I never understood why it’s called coffee cake, there’s no coffee in it, and what? it goes well with coffee? What cake doesn’t? But I digress.)

Anyway, pretty much everyone who I asked what they thought about the combination of flavors, totally didn’t agree with me. They all felt it was too many flavors, and that it wouldn’t mesh well together. Well guess what, they were wrong!

To me this dish was more an experiment in flavor combination, and less an experiment on the consistency of the cake. So I used the first coffee cake recipe I can find (it called for blueberries), and just substituted bananas. The recipe also called for sour cream, which I used the parve type.

So as with any cake that has sugar and a fat in it, we start by creaming the two together, and the best way to do that is with everything at room temperature. After the margarine and sugar are nicely integrated, add the egg, and egg yolks and mix to combine. 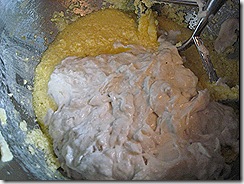 And now it is time in sprockets for when we add the dry ingredients. Mix together the flour and the baking powder, and with the mixer on low, add the flour slowly until incorporated, making sure to not over mix the batter. 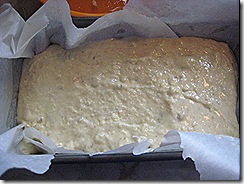 Then pour the batter into your pan, and I figured, since the pomegranate molasses was pretty thick (I had over reduced it some, as I’m sure you knew, since you read the last post!), I first needed to warm it up so it would pour out of the container (yeah, it was pretty thick), and spread the remaining molasses throughout the banana cake thusly: 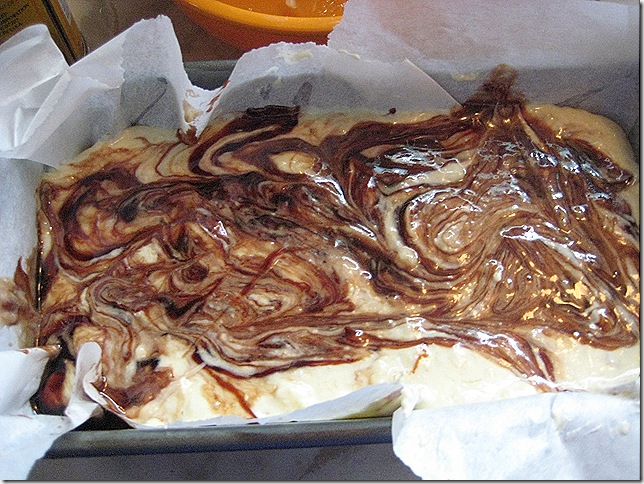 I tried to spell my name in it, but it didn’t really work out so well.

Once that was all done, it was time to officially deem this cake a coffee cake, and give it it’s proper regalia: a crumb topping. Mix some margarine, sugar, and cinnamon together and presto chango – you can now transform anything you want into a coffee cake. 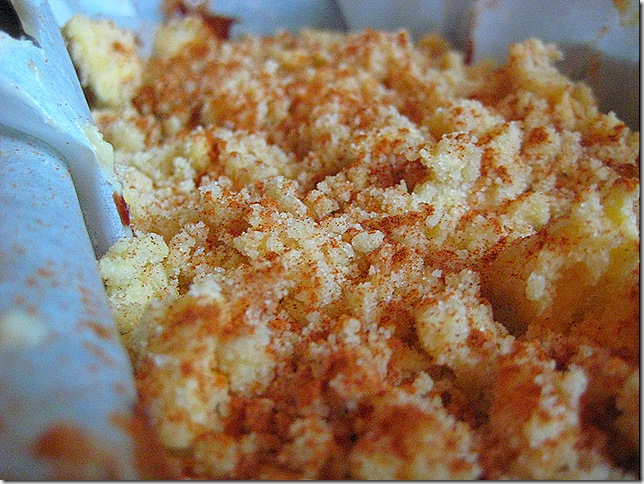 Bake at 350 for like 30-35 minutes, or until the center is set, and then allow to cool before devouring.

So here’s the deal, once people were telling me that a banana pomegranate coffee cake sounded disgusting, I had to make it to find out for myself whether it was going to be an epic disaster or not. Well my take on the cake (I’m a poet, and I didn’t even know I was) was that, the actual cake itself could have been a better consistency, I felt like it was too gummy, and I’m not 100% sure why, however, the actual flavor combinations that were going on here, were great. I really think the banana went well with the pomegranate molasses, and crumb topping, and I definitely would try it again.

I’ll post the recipe I used, but if you’re actually planning on making this at home, I would suggest (possibly incorrectly), to just take any good banana cake recipe you have, and continue with the rest of the ingredients, and I’m sure it will be fine. 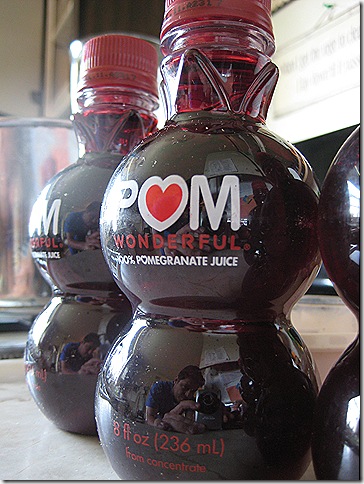 Man it’s been a while. So how’ve you been? Terrible?? Why? Oh, because I haven’t posted in quite a while? Well I’m sorry to hear that, and had I known that I was that important in your life, I might have gotten off of my lazy behonkes a few days sooner and posted something for goodness sake!

Anyway, remember the other day I was telling you how cool I am? Well I come to re-iterate that. You see, right before Pesach I got an email from Pom Wonderful, the company that makes pomegranate juices, and they asked me if they can be the official pomegranate juice of the KosherGastronome. To which I replied, only if you’ll put my picture on your bottle, to which they happily complied. 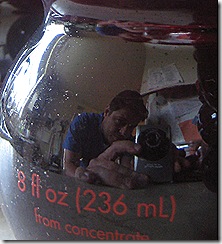 Anyway, what really happened, is the wonderful people over at Pom sent me over a case of pomegranate juice for me to tinker with, but it took me a while for my creative brain juices to flow.

Ok so pour four cups of pomegranate juice into a pot, add juice of a half of lemon, a half a cup of sugar, and cook it on medium until it starts to simmer, and then lower it to low, and let it cook until thickened, about 50-60 minutes. 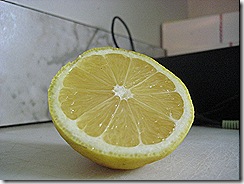 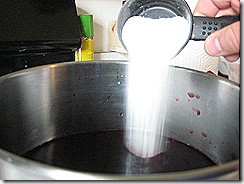 Now the way you know it’s nice and thick is the spoon-swipe trick, like so:

Take a spoon, and dip it in the syrup, and wipe your finger across the spoon, and if the streak your finger makes stays, then you know your syrup is good and thick. 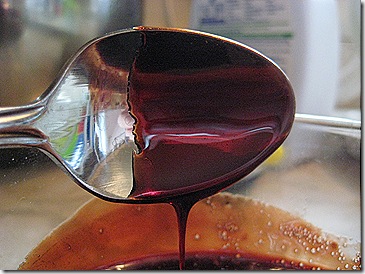 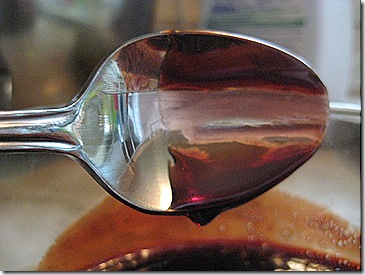 I started by cutting up some onions and some garlic, and placed them on the bottom of the pan. I put the chicken on top of the onions, salted and peppered them up, and since the pomegranate was cooking up on the stove, I decided to take some of the then pomegranate syrup, and poured about a half a cup of the syrup on the bottom of the chicken pot. 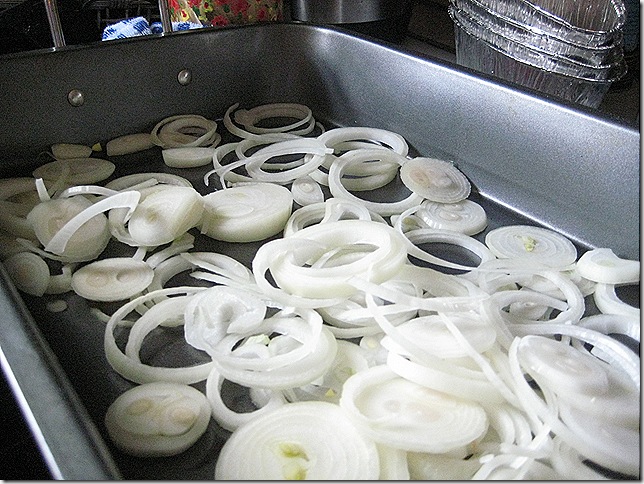 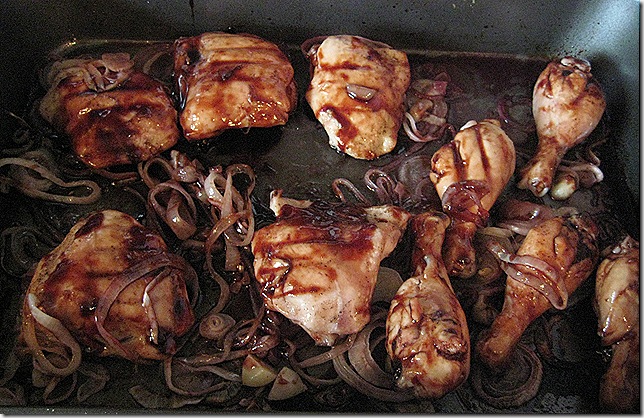 Ok so the moment of truth, how was it all? Well to be honest, the chicken tasted good, not great, but pretty good. (I feel like you can’t say that on a food blog, because I have to make you guys think that everything I make is amazing, well truth be told some stuff are just amazing [without the italics], but that doesn’t mean it tasted like sock stew, it just might not be foie gras [shout out to Nechemia Gertner for the foie gras..gracias]).

As for the molasses, well, I actually thickened it up a little too much, and when it completely cooled down, it ended up looking like pomegranate toffee, but no biggie, I was able to work with it, by heating it up a little so I could spread it on the chicken easier.

But wait – I didn’t use the whole pomegranate molasses on the chicken, I had some leftover molasses to mess around, so tune in until the next time I decide to not be lazy, and prepared to be wowed. 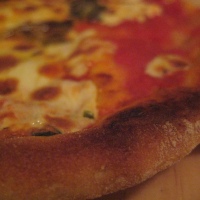 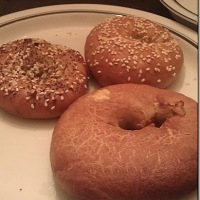